Do You Think An Uninsured Driver Can Sue You?

Home » Do You Think An Uninsured Driver Can Sue You?

In a recent Facebook poll we asked fans, “Do you think someone injured in a not-at-fault accident while driving WITHOUT insurance should be able to sue the other party?” The majority of fans responded “no” but the PA Supreme Court says “yes”. 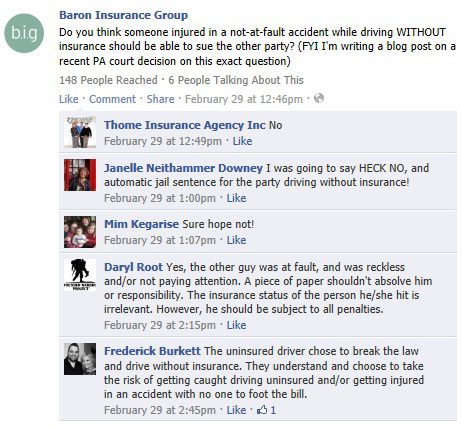 On February 6, 2006, Mary Corbin, was driving south on Route 413 in Bristol, Pennsylvania, in her uninsured vehicle and Suresh Khosla was driving his insured vehicle north on Route 413. As the vehicles approached each other, Suresh turned left in front of Mary resulting in a motor vehicle accident in which Mary sustained bodily injury. Even though Mary was uninsured, she sued Suresh in the United States District Court for the Eastern District of Pennsylvania.

On February 21, 2012, the PA Supreme Court ruled in the case Corbin v. Khosla that an uninsured driver injured in a motor vehicle accident may sue the defendant driver for medical expenses and lost wages. The court stated Section 1714 of the Motor Vehicle Financial Responsibility Law does not prevent an uninsured motorist from recovering tort damages for economic loss from an alleged third-party.

What are your thoughts on the recent PA Supreme Court ruling? Do you think an uninsured driver should be able to sue for an injury?